Caffè Misto: Everything You Need To Know

We may earn a small commission if you click on a product on bonvivantcaffe.com and buy it.

Caffe Misto is a recent addition to the Starbucks menu. It’s a milky coffee drink, although quite different from other traditional beverages like cappuccino, macchiato, and latte.

What is Caffè Misto?

In short, caffe misto consists of equal parts of drip coffee and frothed milk. To make a tasty drink using this drip coffee to milk ratio, baristas brew drip coffee stronger than usual, and they use a dark roast to compensate for its watery mouthfeel.

The caffe misto price for a tall cup can be less than 3$, and it tends to be cheaper than espresso-based drinks. This makes it a budget-friendly alternative.

The main difference between caffe misto and latte is the type of black coffee they use. Latte is based on espresso, while caffe misto has drip coffee.

Considering the differences between both espresso and drip coffee, they have different tastes and baristas build the drinks differently.

Espresso has a stronger, more concentrated flavor than drip coffee does, so a latte usually has two parts of milk for each part of coffee. In contrast, Caffe Misto has equal parts of coffee and milk, so although it has more coffee, it has a lighter mouthfeel.

In common, both drinks use frothed milk. However, due to the size and body of the caffe misto, it’s not possible to pour latte art forms on top of it.

Cafe au lait is the French relative of caffe latte and caffe misto. Simply put, it’s a mix of drip coffee and milk, but the ratios depend widely on preference. To some extent, cafe au lait is a homemade coffee drink, although most coffee shops in France serve it as well, particularly to go along with breakfast.

Besides coffee to milk ratios, milk preparation is the main difference between cafe au lait and caffe misto. While a Misto has frothed milk, cafe au lait can have warm milk, without frothing.

How Does It Taste

Predicting a coffee drink taste based on coffee to milk ratios is a wild thing. I can get really snobby here and talk about processing methods, roast type, and brew strength.

But, it has a strong coffee taste and looks darker than a latte -assuming that you’re using a strong drip coffee with twice the scoops that you use normally.

Talking about it, to make a good Caffe Misto takes a strong drip coffee. But, let’s get to it in the next section.

How to make a Caffè Misto at home?

You don’t need fancy coffee gear to make a Caffe Misto. In fact, you only need a home coffee maker and a milk frother to brew a good one.

Using a French Press can get you an even richer cup of Caffe Misto because the brew tends to be bolder and stronger. In any case, you can use this calculator to measure the coffee to water ratio.

While your coffee is ready, heat your milk for a few seconds. Avoid putting it to a boil. Even if it’s warm a regular frother will get you a nice microfoam.

Once you get a layer of microfoam of 1/2 inch, stop and let it rest a bit, while you serve the coffee.

Then, pour the milk, saving the foam for the top.

And voilá! You can decorate with cinnamon or dark cocoa powder if you like. I am used to drinking my Caffe Misto without addons, but I like to add cinnamon occasionally.

So, it’s natural that you have some questions about Caffe Misto. I’ll do my best to answer them in advance, but feel free to leave your questions below in the comments. I’m happy to help!

Is An Americano With Hot Milk The Same As A Cafe Misto? 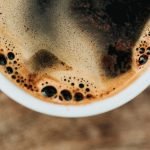 How many calories are in a Cafe Misto?

Black coffee has very few calories, so it depends heavily on the type of milk you’re using for it.
As a reference, using the Very Well Recipe Nutrition Calculator, I got the following values for 1/2 cup of milk -remember that the other half is black coffee.
– Whole milk: 83 calories
– Soy milk: 68 calories
– Oat milk: 68 calories
– Skimmed milk: 46 calories
– Almond milk (Unsweetened): 31 calories

Starbucks Caffe Misto with syrup usually has a considerably higher calorie count. A single tablespoon of Hazelnut syrup has 80 calories, according to the Very Well Recipe Nutrition Calculator.

Black coffee is very low in calories, so it only adds about 7 to 9 calories per cup. Bear in mind that sugar, syrups, and other add-ons change drastically these nutritional facts.
In any case, always check your milk’s label to have a better estimate.

How much Caffeine is in a Cafe Misto?

Caffeine content can vary significantly. Moreover, the National Coffee Association states that an 8 oz cup of coffee can have between 65 mg and 120 mg of caffeine.
In short, if you drink an 8 oz Caffe Misto it has half of that caffeine dosage, between 32.5 mg and 60 mg of caffeine.

Is A Cafe Misto Sweet? 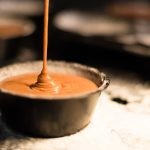 You can customize your Starbucks Caffe Misto as much as you want, adding sweet syrups like hazelnut, caramel, or chocolate are good alternatives for this drink. However, the original recipe doesn’t include any sweet syrup, and you can add sugar, but it isn’t mandatory.
Personally, I prefer to drink coffee without sugar because it’s healthier and I can appreciate the coffee aroma and taste better.

You can customize your Starbucks Caffe Misto as much as you want, adding sweet syrups like hazelnut, caramel, or chocolate are good alternatives for this drink. However, the original recipe doesn’t include any sweet syrup, and you can add sugar, but it isn’t mandatory.

Personally, I prefer to drink coffee without sugar because it’s healthier and I can appreciate the coffee aroma and taste better.

I have been enjoying coffee a lot more since I learned about Specialty Coffee in 2016. As a curious coffee enthusiast, I have talked with some of the most regarded industry experts and scientists to offer you the most accurate and exciting content.
0 0 votes
Article Rating
Subscribe
Login
0 Comments
Inline Feedbacks
View all comments

We may receive commissions when you click our links and make purchases. However, this does not impact our reviews and comparisons. We try our best to keep things fair and balanced to help you make the best choice for you.

As an Amazon Associate, I earn from qualifying purchases.

Additionally, we participate in several affiliate programs that help us provide different options to you: