Whipped to Perfection: How Pakistan Drinks Its Coffee

We may earn a small commission if you click on a product on bonvivantcaffe.com and buy it.

Coffee is a very versatile brew and is made and served in a plethora of ways all over the world. In the West, espresso shots are the key elements of coffee drinks like cappuccinos and lattes. In the Middle East, in Turkey, coffee or kahve is brewed in a stove pot and served in little cups. However, winter nights are synonymous with cups of whipped coffee in the Indian Sub-continent, which comprises Pakistan, India, and Bangladesh. A concoction made of instant coffee and full-cream milk.

How Coffee Came to Pakistan

Pakistan is the land of tea drinkers, and tea is the keystone of all Pakistani social gatherings. From family functions to nights out with friends, you can expect to have tea anytime Pakistanis gather together.

With the love the Pakistani people have for tea, it seems unlikely we would ever switch to coffee. Surprisingly, even the most traditional Pakistani households reach for bottles of coffee when the cold seasons set in.

You might think Pakistan is new to coffee. However, the background of this beverage can be traced back to the Mughal Empire. Coffee was a prized commodity in Arabia, and you could only export roasted coffee beans from the region. This prevented coffee from being grown anywhere else.

Historical evidence proves that even the Mughal emperors imported coffee beans for their use. However, according to history, a religious man named Baba Budan snuck raw coffee beans from Arabia by hiding them in his beard. He planted those beans in the Chandragiri hills, an area that is now called Budangiri, and where he is now buried.

How Coffee Culture in Pakistan Developed

During the 17th century in the Mughal era, coffee houses, or qahwakhane, opened up across India. (Pakistan was one with current-day India before being separated in 1947).

Poets, scholars, and government officials gathered in these social hubs, and coffee became the center of Indian society.

Coffee continued to remain very popular until the British came to India, bringing with them tea. When India became a British colony, and the Mughal Empire fell, coffee houses started shutting down, and coffee slowly got replaced with tea.

It wasn’t until the 20th century that coffee was finally able to make a comeback. Coffee houses, this time modeled after Western cafes rather than traditional qahwakhanes, were constructed in posh areas of the country. For example, Espresso cafe, which opened in 2004, played a big part in promoting coffee culture.

However, these coffee houses were for the rich and famous. What won the hearts of the common Pakistani people was instant coffee.

The Pakistani people got acquainted with coffee when companies like Nestle and Maxwell House brought bottles of instant coffee to the shelves of grocery stores. Instant coffee was inexpensive and readily available, which appealed to Pakistan’s population.

Additionally, while international brands like Dunkin Donuts have come to Pakistan, people still prefer making their coffee at home.

With the advent of technology and media, western culture has extensively impacted Pakistan’s society. You’ll find coffee houses all over the country. But, they are mainly limited to posh areas. In households all over Pakistan, coffee is still made by whipping instant coffee in a cup.

The Pakistani people like their coffee with a lot of milk, and lattes are the most famous coffee beverage in the country. With this dislike for bitter coffee, it makes sense that Pakistanis would stray away from traditional coffee brewing practices.

Today, Pakistanis add instant coffee and sugar in a cup, with a bit of water, and use a fork to whip it until the coffee becomes thick and loses its color. The longer and harder you whip your coffee, the lighter and better tasting it becomes.

Once the coffee is fluffy and light, it is added on top of a cup of boiling milk. The milk and coffee are stirred and served hot.

Does this coffee-making method seem familiar to you? You might identify it as dalgona coffee. However, while dalgona coffee is a recent trend, people in the Indian subcontinent have been making coffee like this for decades.

Pakistan has developed a very vibrant coffee culture, with Western-style cafes in almost all large cities. However, in the winter, Pakistani households, whether rich or poor, all make whipped coffee at night.

For the Pakistani people, this way of making coffee is not just the norm but also a tradition. In the winter, a cup full of sugar and coffee is passed around by family members, with everybody taking turns beating the coffee until it turns perfectly golden. On frigid winter nights, this coffee-making tradition helps create warm memories.

Do you want to try a traditional whipped coffee recipe at home? Check it below and let me know how you like it! 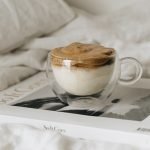 If you’re making coffee for someone else, mixing it before serving is improper. Social decorum demands you let them mix it themselves.

I was 10 when I took my first sip of coffee, and a freshly brewed cup has become a constant companion. Through my work, I aim to explore coffee's history, tradition, and culture and discuss the best ways to make the perfect cup. You can find me sipping a cup of the brew with a book in hand when I'm not writing.
5 1 vote
Article Rating
Subscribe
Login
0 Comments
Inline Feedbacks
View all comments

We may receive commissions when you click our links and make purchases. However, this does not impact our reviews and comparisons. We try our best to keep things fair and balanced to help you make the best choice for you.

As an Amazon Associate, I earn from qualifying purchases.

Additionally, we participate in several affiliate programs that help us provide different options to you: